On Memorial Day, we remember the ultimate sacrifices Americans have made defending this country — this grand, magnificently imperfect Enlightenment experiment in self-governance.

More than 400,000 Americans died fighting in World War II. Among other things, they fought to defeat fascism.

Since that time, there has been a strain of fascist thuggery that remains alive in this country. Thanks to the decency and wisdom of the majority of Americans, it has been relegated to the fringes of our society. Now we have a Republican presidential candidate who is more than willing to be its standard-bearer.

So as we honor the service of our fellow Americans this weekend, especially those who fought and died in World War II, let us also reflect on the fact that this November, we may well elect that vulgar carnival barker to lead us, thereby embracing that which we once opposed and rendering the sacrifices of more than 400,000 Americans for nought.

Shame on us if we do. 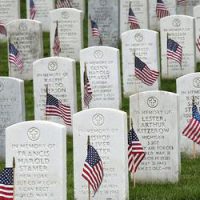 View all posts by Bill Merklee